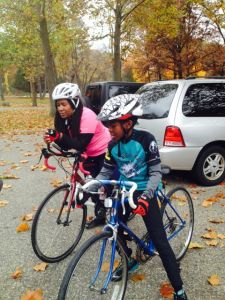 We had a great day to ride Kensington today, with unusually mild temperatures for late October. Riders included Myrna and her two sons, Ken Gardner, Ken Jackson, Gerald Walker, John Shorter, Shawn Bryant, Klaus Pochner and John Royal. Klaus’ reputation preceded him. He had ridden to Kensington from his house and rides Kensington during his lunch hour. John Royal also rode over. Shawn had already ridden 60 miles. I had never ridden Kensington, but I had heard that it and Island Lake had plenty of hills. Message to self: Give some thought to starting a hilly ride with someone who grew up in Germany with the Alps in his backyard (Klaus) or someone from Pennsylvania and Colorado (John), or someone with a steady diet of century rides (Shawn).

We all set out from the parking lot into the park with Ken and Gerald leading the main group and Myrna leading the B group. The first climb wasn’t too bad. Following Klaus and John, we all made it to the top without much effort. Over the crest we had a bit of recovery until Shawn sped by, tucked low on his aero bars. It was on after that! The next several hills took an accumulated toll on all of us, except for Klaus, John Ken and Gerald. I was thinking to myself, “hmm, maybe I can turn around and catch up with Myrna and the boys”.

We regrouped at the exit of Kensington. After a quick refuel it was on to Island Lake. More rolling hills, but we were warmed up now and moving pretty well. Ken waited until we were heading back to tell us about Garbage Hill, a 1040ft slow climb bordering the landfill near South Lyon. We were able to maintain a decent climbing pace up Garbage Hill, but the length had us breathing pretty hard near the top. Then it was a welcome blast along the flat terrain of the Huron Valley trail into South Lyon. It was difficult to relax on the ride back knowing that Garbage Hill awaited us. The climb this time didn’t seem as bad. Maybe it was because I was following Klaus, John and Gerald. Clearing skies and the sun rewarded our successful climb of Garbage Hill. John left us to return home and the rest of us headed back to Kensington. Blue skies and fall colors greeted us as we closed out the final 7 miles of of a great ride. Thanks guys. Now I can take two Tylenols and watch the game.

< Previous Next >
+ Add your own event Eventbrite